I love bonfires! I love roasted marshmallows and I love S’mores! What’s not to love? You have graham crackers, chocolate and marshmallows. According to wikipedia the name S’Mores comes from the contraction of the words Some More, because that is just what you say after you have one. S’mores, please!

While the trilogy of cracker, chocolate and marshmallow is fantastic, sometimes it’s fun to change it up a bit. If you haven’t already noticed the flood of products trying to recreate the iconic campfire treat including granola bars, Pop-Tarts, candies and more and are changing it up. Now it’s your turn to change it up at your next campfire, or perhaps on August 10th, which is National S’mores Day. I’ll be camping t 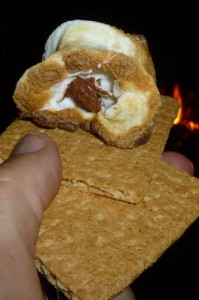 hat day, so you better believe I will be honoring the day. I will just have to decide which idea(s) we want to have that night.

Reese’s Cup S’mores – Swap out your plain chocolate bar for a Reese’s Peanut Butter Cup. If you are a peanut butter fan, you will find this a divine swap. What other candy bar would you swap out the plain chocolate for? Perhaps some Andes Candies if you are a mint fan?

Gooey Center S’mores – Insert a Milk Dud or Rolo in the center of your marshmallow before roasting then squeeze the gooey centered marshmallow between graham crackers.

Chocolate Graham S’mores – This might be just what you are looking for if you are counting calories or fat grams. Swap out your regular grahams and chocolate and replace with chocolate graham crackers to get the chocolately flavor without the added calories or fat. 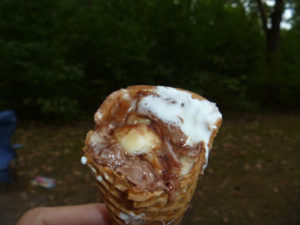 refrain from starting your marshmallow on fire in  favor of stuffing a sugar cone with mini marshmallows, chocolate chips (I like milk chocolate chips), chopped banana chunks and wrapping it all in some aluminum foil and cooking it over your campfire.

Nutella S’mores – If you dislike the un-melted chocolate in your S’mores, you might want to consider swapping out your chocolate bar and slathering some Nutella on your grahams before you squish your roasted marshmallow in between.

Indoor S’mores – Just because it’s raining outside or it’s January, doesn’t mean you can’t have a S’mores. Make an Indoor S’mores by spreading Nutella (or chocolate frosting) on one graham cracker and marshmallow fluff on another graham crackers and press together. No campfire needed!

S’mores Krispie Bars – Instead of making Rice Krispies, try making S’mores Bars. Follow the instructions on your bag of marshmallows and instead use graham cereal  (like Honey Grahams) instead of crisp rice cereal and toss in 1/2 Cup of chocolate chips. 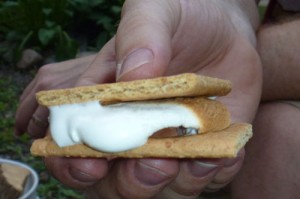 Marshmallow Mix Up – Maybe it’s the marshmallows you are bored of, then try one of the flavored out there like caramel, mint, pina colada, strawberry, chocolate and more. Or maybe even the different Peeps out there for a variety of holidays.

Baked S’mores Bars – I have made these Rockin’ S’more Bars recipe from Family Fun Magazine and they are awesome.  I made them at home and loved them so much that I made them for book club too. Best served warm!

Classic S’mores– I would be amiss if I didn’t pay homage to the classic s’mores which is a piece of chocolate (you decide how big a piece is) and a roasted marshmallow sandwiched between 2 pieces of graham cracker.

And who says you can’t have S’mores for breakfast? Check out my recipe for S’mores Oatmeal on Save Green Being Green.