You are here: Home / Frugal Living / A Look Back: My 2013 New Year’s Resolutions 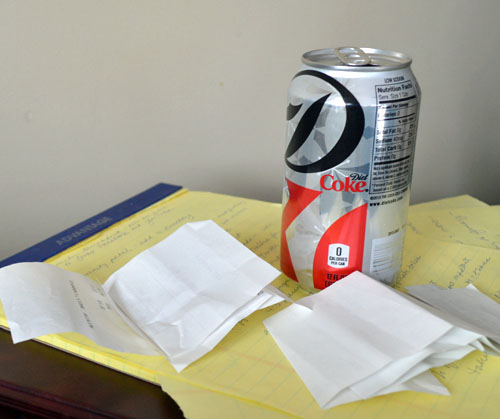 It’s that time of year when we like to look back on the year and reflect on what we’ve accomplished.

I’m going to be honest. I really (I mean really) dropped the ball on my 2013 New Year’s Resolutions.I think the key to learning from your mistakes is to analyze what went wrong.  So today, I’m sharing my struggles at accomplishing my goals for 2013 with the hopes of starting with a better approach for the new year.

New Year’s Resolution #1: Tame the paper tiger.   This was a partial success.  I did manage to purge quite a lot from our filing cabinet early in the year.  I shredded a lot of paper.  I stopped keeping utility statements from 2003 and car repair receipts for cars we no longer own.  I also started signing up for more e-statements to reduce the amount of paper entering the house.  Unfortunately, there is still more paper taming to be done.

New Year’s Resolution #2:  Establish allowances and teach kids about money management.   This was another partial win.  I have been really struggling with whether to connect the allowance to chores or not, and so I spent the year obsessing about what was the right thing and not doing anything.   On a positive note, I did try to teach my boys more about how to handle money they received throughout the year (from birthdays, Grandma, etc), and it has led to some good talks about making wise choices with your money.  We are also working on getting them to do more things around the house.  I think we’re headed in the right direction, but there is more to do.

New Year’s Resolution #3: Set monthly goals and hold regular budget meetings.   This resolution was one of the few that we did well at.  My husband and I had numerous budget meetings and talks about our finances throughout the year, and while I’m still the chief financial officer, he was a better understanding of how our budget works.  We’ll definitely continue our conversations in the new year.

New Year’s Resolution #4: Cut back on soda.  This was a monumental FAIL.  I knew I could go without soda because I’ve done it before, but when I started Weight Watchers I began to use diet soda as a way to curb my insatiable sweet tooth.  The good news:  I’ve lost 24 pounds (and I’m still losing).  The bad news: I think I’m actually drinking more soda than when the year began.

New Year’s Resolution #5 Get caught up on scrapbooking.  This was also a big fail!  I started out strong at the beginning of the year (like so many well-intended folks do!), but then life got in the way.  I picked up some additional freelance writing this year that took up more of my time and just didn’t get to scrapbook as much as I like.

So what did I learn from all this?

I learned a few things about why I dropped the ball on my New Year’s resolutions.

I forgot to envision success.  Because I was so wrapped up in most of my resolutions feeling like chores, I didn’t stop to think at all at how good it would feel to get these things done.

I didn’t have a real plan.  There’s a saying that goes “If you fail to plan, you plan to fail” and it is TRUE.  I didn’t really have a plan for how I was going to handle soda withdrawal or when I was going to actually find the the time to scrapbook.

I didn’t make my resolutions a priority.  As other projects and interests cropped up, my New Year’s resolutions were pushed to the bottom of my list.  I know that if I had prioritized them, they would have gotten done.

Some of you are probably shaking your heads.  You’re saying “This is exactly why I don’t bother making New Year’s resolutions.”  But I still plan on making more.  I think it is important to reflect on the past and to look ahead to the future.  I think it is a good thing to strive to be the best you can be.

So that’s why I’m already thinking ahead to the new year and making plans to have more success at accomplishing my goals.  I’ll be sharing my 2014 New year’s Resolutions in an upcoming post.

In the meantime, I’d love to know how all of you did with your 2013 New Year’s resolutions?