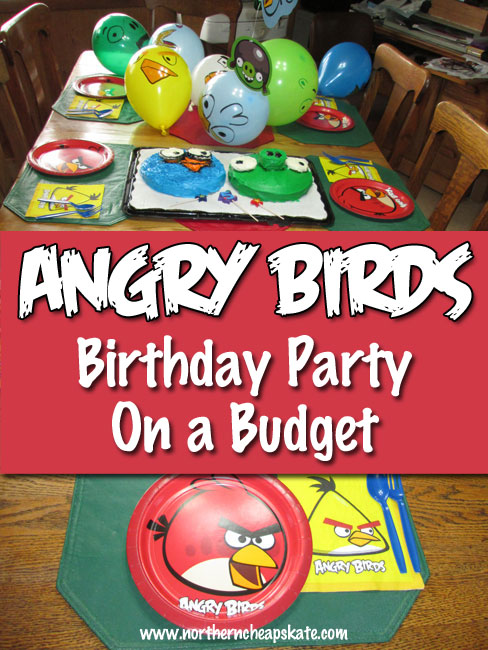 We had an Angry Birds birthday party (or should I say parties?)  for my 5-year-old son. Normally a character-themed birthday party can get expensive, but  I am going to show you how I did it on a budget.  Use my tips to apply it to any birthday party theme you’d like. 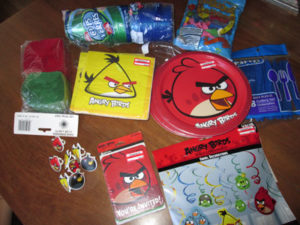 To start off with, we decided upon the theme when I was shopping with my son at Target and we came across packs of napkins and plates for under 75-cents a piece! I asked him if he would like an Angry Birds party a 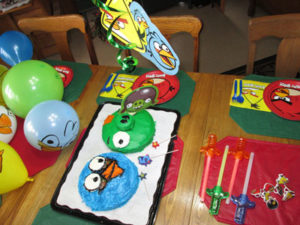 nd he agreed to this three months before his actual party.

We bought enough to use for both a friend party and a family party knowing that this was even cheaper than the dollar store and he got the bonus of the trademark character theme to his party.

A week later I was back at Target and saw that the decorations, invitations and rings were now on clearance for about $1 a piece. The crepe paper I found unopened at a thrift store for only 15-cents and then I filled in with cups (one set to be used for a game pictured below), balloons for decorations (made in to Angry Birds) and utensils from the dollar store. All with enough for both parties. 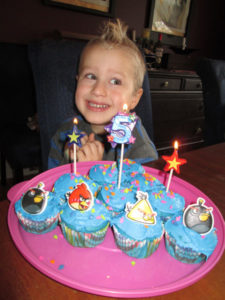 We decided to pocket the extra money a store bought cake would cost and make our own. My son really wanted blue cupcakes with his friends. Both Pillsbury and Duncan Hines make blue cake mix and have blue frosting that came with sprinkles and I watched for them to come on sale to save some money there. We decided to keep the cupcakes simple and top with rings that would also be party favors.

For his family birthday party, I wanted it to not be too time consuming to decorate the cake since we would be traveling and I wouldn’t have access to all of my supplies. We made the pair of round Angry Bird Cakes (using the leftover blue frosting from his friend party) and buying another color of frosting for the second. You could also try making this Angry Birds Cake that I made my husband one year using fondant. 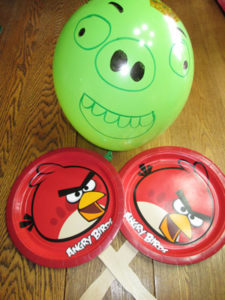 To provide us with some games and activities, but keep the cost low. I made 2 games for the kids to play. One of them is an Angry Birds Paddle Game using Angry Birds plates taped to paint sticks as paddles and Green Balloons drawn with permanent marker to look like the pigs to hit back and forth.

The second game consisted of green plastic cups that I tape pictures of the pigs to that are stacked up in different configurations . We used a sling shot and some Angry Bird toys my son already had to see how many pig cups each child could knock down. You might also consider trying out this DIY Real Life Angry Birds Game that I made for the kids this summer. 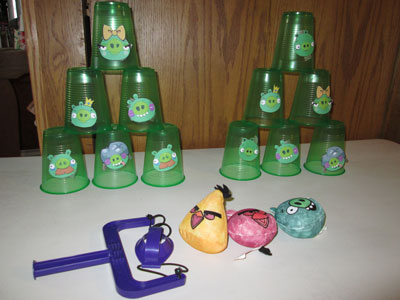 To get my son excited about his party, I had him help me pick out some images to print off just by searching “Angry Birds Pig” on Google and clicking on the Image tab to see the results and then copying and pasting the images in to a document and printing off.

I asked my son what he wanted for a birthday meal and he requested Chicken and Dumpling soup with my homemade dumplings recipe. Now I couldn’t really put a spin on the soup to make it Angry Birds, but I could with the side items. 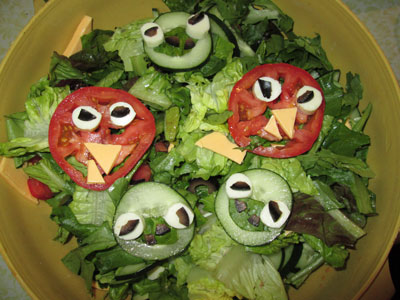 I made a regular salad, but turned the vegetables on top in to the red Angry Bird and a pig by using cucumbers, lettuce, black olives, string cheese, sliced cheese and tomatoes. 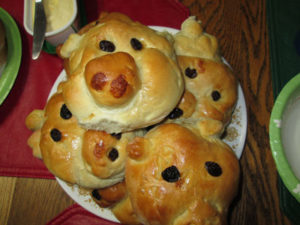 I also made Pig Buns, well, I guess they are buns that look like pigs. I bought frozen bread dough and let it thaw until completely thawed and them shaped in to different sized balls that I pinched together to make a head, snout and ears. I used raisins for the eyes and nostrils. 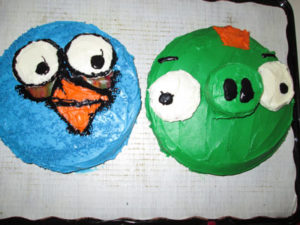 And finally, I tried my hand at some Angry Bird and Pig Cakes.

I used a regular cake mix and make 2 round cakes. The eyes were made by frosting a store-bought cookie and the pig snout I made by stacking together 3 store-bought cookies with frosting holding them together. I used Wilton icing for the black and orange frosting. I also placed blue sprinkles we had in the cupboard on the blue bird to help it look more feathery. The dark orange/red under the blue birds eyes are made out of cut fruit roll-ups.

I hope this has inspired you to come up with some ideas for your own Angry Birds party or use some of mine. Be sure to also read my post 15 Ways to Make a Child’s Birthday Special for other low-cost ideas you can try. 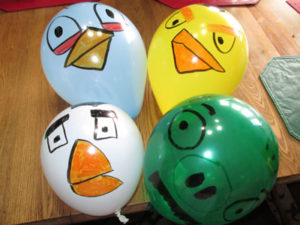