You are here: Home / DIY / Recipes / Four Ways to Dress Up a Brownie Mix 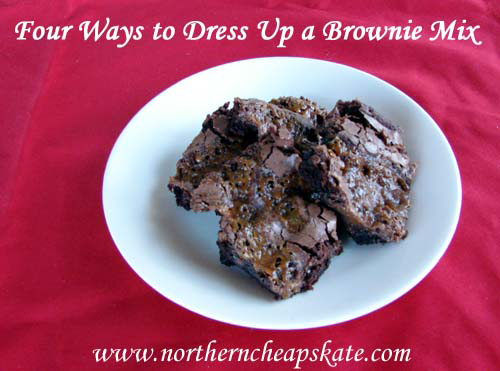 I attend a department meeting once a month where we take turns being treats.  This month I brought brownies.  To my surprise, some folks do not know the tricks that can be done with regular brownie mix to improve it.

Here are my four favorite ways to dress up a brownie mix.  If anyone asks tell them it was very complicated with a lot of exotic ingredients.

Start with a box of brownie mix.  I don’t have a favorite; I just buy whatever brand is a dollar.  I usually stock up on a few boxes when they go on sale.  I use the 9×13 size box.

All of these must be totally cool before you cut them or the get all goobery. On the other hand, I get to eat the brownie goobers at my house.  If that is the case at your house, do whatever you need to do.