You are here: Home / DIY / Organization / From Mess to Less: Dealing With Kids Toys 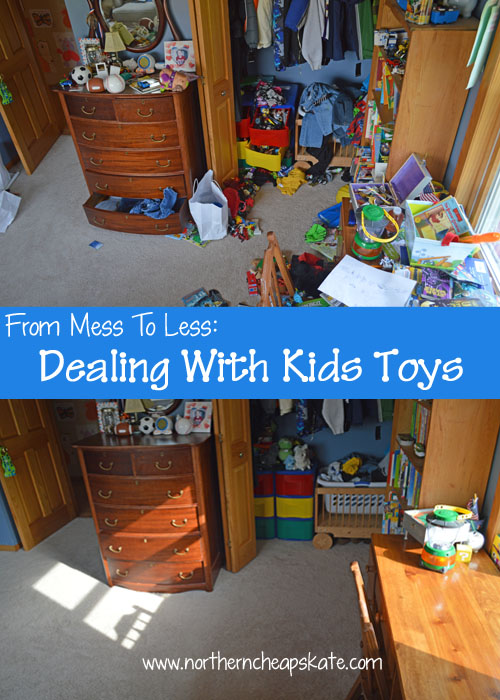 One of the top questions I get asked about whenever I talk about getting rid of stuff and wax poetically about less stuff, more happiness, is “What do you do about all the kids’ toys?”

I don’t know that I know a perfect solution.  We have three boys who LOVE their stuff, and an ample supply of doting relatives who spoil them with all kinds of gifts.  Keeping their rooms under control is an ongoing battle. But we did stumble across a way of dealing with kids toys that seems to be working for us right now.

And then, we didn’t really give them a choice.  We just told them that we were going to do it.  And we promised them a trip to the park when they were done.

We started off by emptying every toy bin and toy drawer in their room into the middle of the bedroom floor.  Then we gave each boy an 18-gallon plastic bin.   They had to sort through all the toys and determine what they truly wanted to keep and place it in the bin.  This was the point at which I learned that one of my boys is very good at packing things.  It also led to a good discussion about how to decide what to keep.  We talked about how often they played with a toy, it’s condition, and whether it was something they truly loved.

Once that task was completed, we cleared out all the reject toys from the room.

We then gave them the task of whittling down their possessions even more.  They each got two storage drawers to fill.  They could put whatever they wanted to keep in the drawers, but the drawers MUST close.

When that task was finished, we removed the reject toys from their room. We also went through every book on their book case and determined what should stay, what would get packed away (childhood keepsakes, you know) and what could get donated.

We did a similar process in the family room with the toys, games and puzzles (yes, they really do have that much stuff!).

We finished the entire project in about four hours (which includes some short breaks) and ended up with clean rooms and a giant pile of things to sell and donate.

The kids were surprisingly good about the whole process.  In fact, one of my boys said, “We should do this more often so that our room is always this clean!”

The best part:  They actually have some empty drawers and bins. There’s even a little extra room on their bookshelves!

I think the key to making this work was that we involved them in the process.  They got to decide what was most important to each of them. They were able to see that less clutter made their room a nicer place to be.

The real challenge will be keeping up with an influx of new stuff.

How do you deal with toy clutter in your house?  What works in your family?