You are here: Home / DIY / DIY Projects / Getting It Done: Doggie Pedicure 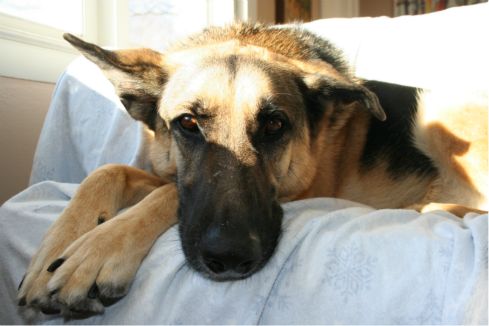 Last spring I decided I was ready for a dog.  Frankie came in to my life on Memorial Day and both of us have been better off since.  He is a 75 pound German Shepherd and about 4 years old.  It took us 2 months to figure each other out and for him to get over his broken heart.  Now his heart is filled with love and his body full of wiggles.

He does have a couple of quirks, including being very afraid of being left again.  Which put me in a very tough spot when it came to getting his nails cut.  The first place I took him I had to hand him over to the groomer who took him down the line of dogs and cages.  He promptly slipped his collar and came running back to me.  I handed him back and had to leave the room.  Then, he was so afraid that he peed on the groomer.  I wanted to cry for my poor, terrified boy.

The logical solution here would be for me to do his nails.  I tried and just can’t.  The problem is with me and the fact I can’t bear the idea of hurting him.  I also don’t like the feeling of the nail cutter cutting.  Stop shaking your heads at me.  I am tough, I am strong, I am not queasy with blood or diapers or snot.  I can’t do this one.

The next time I tried to have his nails cut, I was at the dog wash.  Yes, I pay 15 bucks to use a fancy bathtub to wash my dog.  I think of it as a $185 discount on the plumber I don’t have to call if I were to wash him in my bathroom.  He produces a LOT of fur.  Anyway, as the lady there approached him to do his nails, he rolled back his lips and growled a fierce, face-eating growl.  Needless to say, we didn’t push it.

His nails were successfully trimmed in August but only because he was under general anesthetic for dental surgery.  It worked but wasn’t really a permanent solution.

We got there and ol’ Frankie was not fooled.  He knew this was not a place he wanted to be.  We had to boost him up on to the grooming table.  But, since I was there and could talk to him and hold him still, he did just fine.  Snip, snip, done! $10.55 and priceless relief.

What I learned from this experience is this:  If you have a situation that is atypical, the phone is your friend.  Make some calls to see what is available in your area and price range.   Explain your problem and see how the folks on respond on the phone.  You will strike out and you may strike out more than once.  The older I get, the more I realize “normal” is a sliding scale and am always on the lookout for people who also understand that!  Keep searching!

This post is part of year-long vow to get those projects done that we’ve been putting off. Stay tuned next month as Michelle tackles something on her “Get it Done” list.  Now it’s your turn:  What project did you finally get crossed off your to-do list this month?  What’s on your “Get it Done” list for next month?