You are here: Home / Living Green / How I Plan To Use Fewer Paper Towels

I come from a family that uses a lot of paper towels.  Anything remotely messy was tackled with a roll of Bounty.

Paper towels take a lot of resources to make, package, and ship to the stores.  They’re not cheap (at least, not if you want good ones!), and they take up an enormous amount of pantry space.

As part of my pledge to live greener, I want to reduce my dependence on paper products, and paper towels are high on the list.

So I thought I would share how I plan to use fewer paper towels in the hopes that it can help you make the transition to living greener, too.

How I Plan to Use Fewer Paper Towels

In case you didn’t notice, my plan is to use fewer paper towels – not eliminate them altogether.  The reason is because I live in a house with three boys, a husband and a dog, and sometimes gross stuff (really gross stuff) just happens.  I plan to keep a few rolls on hand for those too-gross-to-touch-more-than-once messes and for things like draining bacon.

To start with, I changed what paper towels I purchase. I prefer to use the paper towels that let you select your size because I find that I rarely use a full sheet of paper towel anymore.  And I’ve been using old cloth rags to dust the house with for awhile.

But I know that’s not enough to reduce my  use.  I knew that I would have to make it harder for me and my family to grab a paper towel.

The solution:  I removed the paper towel holder from my kitchen counters.  The extra rolls are tucked away in my linen closet and there is one roll under my sink for any paper towel-worthy messes.

I also had the bright idea that I could stretch that one roll of paper towel even more by cutting it in half with a serrated knife.

Ummm.  That didn’t work well. Perhaps it was my knife choice, or maybe just the way I cut it, but I ended up with two halves of a shredded paper towel roll.  Still useful, but a lot messier than I had hoped for.   In a way, I’m kind of glad that happened, because the thought of the mess caused by using these paper towels may just deter me from using them.

My plan to use fewer paper towels means I need to have an alternative.  Being the cheapskate that I am, I kept all the old white diaper cloths that I used for burp rags with my boys, as well as some of their old flannel receiving blankets.  I also have a stash of ratty old dish towels.  I used some pinking sheers to cut up the receiving blankets so that they wouldn’t shred in the wash.  I could hem them up, but honestly, I’m not very motivated to make these things look pretty since they’re just going to be used to wipe up spills and clean things. 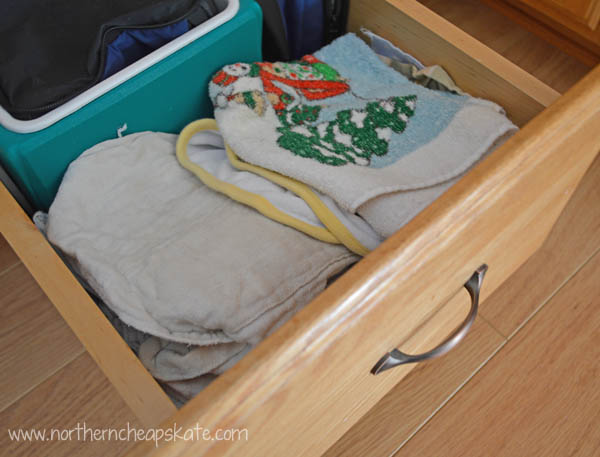 I have placed all the rags and cloth towels in a drawer in my kitchen.  I also put an old plastic pail in the cabinet under my sink so that we have a place to toss dirty rags until it’s time to do laundry.  I don’t anticipate these rags to add too much to my laundry load. 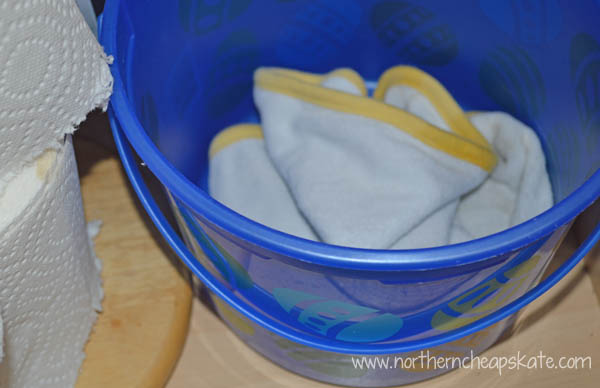 I’m also trying to use less paper towels when I am out and about.  If given a choice in a restroom, I’ll use the hand dryer instead of the paper towels, or I’ll remind myself to just use one piece instead of three.

The family has been alerted to the change.  I know using fewer paper towels won’t be easy for us, but I know it is the right thing to do for our planet and our wallet.

Have you given up paper towels?  Do you have an tips for using less paper towel?