You are here: Home / DIY / Organization / Ideas for Organizing Legos 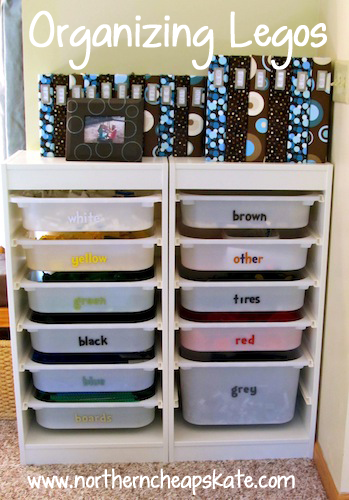 With three boys, over the years the Legos really start to add up.  We had all sorts of sets which had been reduced to just pieces in bins here and there.  I tried to sort them over the years – windows and doors in one, blocks by like size.  Nothing really seemed to work in a way that all the kids could play with them and find what they wanted.  And the instructions were just all over the place.  I felt like we really were not utilizing this great, imaginative and abundant toy in our house.

Luckily, I found some inspiration in the blogosphere on how to organize Legos.

First, I started with the Legos.  I really did think of anything I could use that I already had on hand to sort and store all the Legos in one place, but I came up empty.  After reading how Jen from iHeartOrganizing stores her Legos, I was sold on the idea of using the IKEA system and I even copied her labels right down to the font (Thanks, Jen!).  For what you get, it was a relatively inexpensive way to store so many Legos at once. 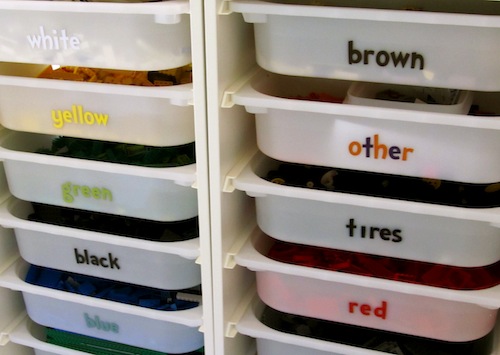 Next, I tackled the instructions.  This is where my journey takes a left turn from frugality.  This was one of those projects that about half way into it, I realized was a bad idea, but I was too far down my path to turn back.  In the end, I do love how it looks, but it was not, not cheap and in hindsight, I wish I would have just used a few pretty boxes to store the instruction packets.

But, no.  I used binders and put each page into its own page protector.  My inspiration came from My 4 Boys.  I did not realize just how many sets of instructions we had.  Yowza!  I kept finding them here and there and everywhere.  As you can see, the number of binders used was, well, a lot.  Now that we are done with this part of the project, I will say that everything is well protected and easy to use.  So, even though it was a lot more money than I was prepared to spend, at least it serves its purpose.  Again, if you have a lot of instructions, consider using a couple of cute storage boxes unless you want to make a serious investment in binders and page protectors.

One cool source of inspiration, from The Uncluttered Lifestyle, was to wrap the binders in pretty fabric.  This was very inexpensive (but time consuming for so many binders!) and I love the look of it.  Having the binders look nice is especially important as the entire system is in our main living area, close to the entrance of the house and with so many, it really helps to break up the sterile look of those binders.

Finally, we needed a way to store all the people, people parts (headless Lego dude, anyone?) and all those adorable accessories.  At least this storage was very frugal.  I bought three containers from IKEA and used one bin that I already had on hand.  The people go in a mesh bin and the people parts (things the people would use – hats, etc.) are in one glass container, accessories in another and believe or not, weapons comprise the third container.  Yes, we have a lot of boys and our Lego dudes have to be decked out with the proper weaponry.    The glass containers are thick and the boys have been great about being careful enough with them for this system to work well for us.

The accessory and people containers live on our shelving, near a play table where the kids play Legos.  The bins are across the room, as that is the only place I could work out to tuck in the storage bins, but with the bins, the kids can bring them over, or load up and bring a smaller container over to the table.  I have two bins on the shelving, one labeled M and the other W for our two youngest kids, ages 8 and 5 to keep the parts from each project in one place and handy if we have to pick up during play time.  This ‘build buckets’ idea was also from Jen at iHeartOrganizing.

I am toying with one final step, turning the play table into a Lego table, ala this table from Kids Activities Blog.  We will see – they use the table for more than just Legos and I don’t want to limit them.  But, the idea is very cool and would help them build more cities and such.

All in all, I am happy with the entire system and we have been using it for about 3 months with just the results I was hoping for – the kids are using the Legos and are very good about putting things back where they belong.  The system is easy to understand and use, even if it was not entirely frugal.

UPDATE:  Since Michelle wrote this post, I wanted to find a more frugal method.  Check out Another Way to Organize LEGOs for a less expensive, but just as effective method!