You are here: Home / Frugal Living / Lessons Learned While Teaching Kids About Money 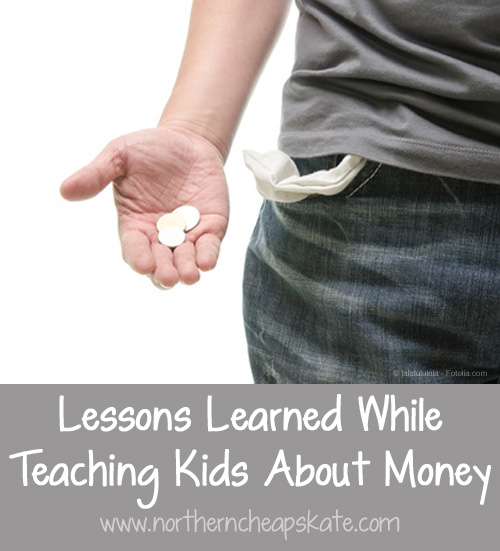 I like to think I have this whole money thing figured out.  I’ve been in debt. I’ve paid off the debt.  I’ve grown our savings.  I’ve made bad purchases. I’ve made smart investments.  I’ve learned a lot.

But teaching kids about money has been one of the hardest challenges I have faced.  There is so much I want them to know, and yet, I know, that some of those mistakes have to be learned firsthand.  As I’ve tried to teach them I realized that I still have a lot to learn.

About 1.5 years ago, I decided to give my three boys (then ages 9 and 7) an allowance.  This was a nominal amount ($5 every two weeks) not tied to chores and given solely for the purpose of learning how to handle money.   The boys got their allowance in the form of $1 bills.  One dollar went to a “giving fund.”  One dollar went to a “savings fund” and the other $3 was theirs to spend any way they chose.

The system worked for awhile.  They seemed to understand why we divided the money the way we did (although one son had initial problems with “giving” any thing! At Christmas time, my boys proudly donated their “giving fund” (which mom matched) to a local animal shelter and soup kitchen.  My oldest boy was trying very hard to save for an archery bow he wanted. I was pleased with how things were going.

But then, the system started to crumble, and I was partly to blame.

First, the boys started to get a sense of entitlement.  I was getting some attitude from them.  Because I had not tied their pay to any work, they were not inclined to help around the house.

And then there was a cash flow problem on my end.  As a person who seldom has cash, coming up with 30 one-dollar bills every month was awful.  I constantly forgot to get the one dollar bills at the bank, and so there were periods of time I didn’t give them an allowance because I would be crabby with their sense of entitlement and short on cash.

So then, I started to pay them for various jobs around the house.  This was hard!  I had to come up with a dollar amount that was both enticing to my kids and affordable for my budget.  My oldest son helped mow the lawn for the first time last weekend.  He worked really hard and did an outstanding job.  My husband wanted to give him $20, but then I reminded him that our son will think he will get $20 every time he mows the lawn next summer.  Where will an extra $80 a month come from in our budget?  And what will our other two children do for jobs to earn money and what will that cost?  We agreed on $10, and our son was totally fine with it.   But the experience really made me think about our whole system of chores.  There are some chores you just need to do because you’re part of the family (clear the dishes, make beds, feed the dog, etc).  And then there are chores that are above and beyond.  What are those worth?

I also learned that I am a bit of a control freak.  Part of my reluctance to turn over chores (both paid and unpaid) to the boys has to do with my own need for things to be “just so.”  I’m learning that everybody approaches tasks differently and that is okay.  I can spend time teaching them what I want done, and then I need to let them go and do it on their own.

I’ve read some great books. I’ve seen fabulous chore charts and checklists for kids.  I’ve seen all kinds of neat online apps for chore charts. But I still haven’t been able to figure out a system that works for our family. My kids don’t really know what is expected of them and they really want consistency.

As a person who prides herself on money management, it’s really hard for me to admit that teaching my kids about money and work hasn’t been going well.

While I’ve struggled with the concept of paying for chores and allowances, I do feel there are some things I am doing right when it comes to teaching my kids about money.   These are the subtle, more indirect teachings of living with frugal parents.

For example, we don’t rush out to buy new things when what we have at home is perfectly good.   We make do with what we have.

We try to fix before we replace.  We recycle.  We upcycle.   We shop at garage sales, estate sales, and thrift shops.

We do our research on major purchases.  We can go into a store and not buy things.  We cook from home when we can.  Rude behavior is never rewarded.  We don’t lend our kids money for things.  If they can’t afford it or forgot their cash at home, they can’t buy it.

We try to focus on experiences instead of things.  We visit the library.  We share.  We save. We give what we can.

This money stuff is hard.