You are here: Home / Frugal Living / Missing Game Pieces? Here’s What You Can Do 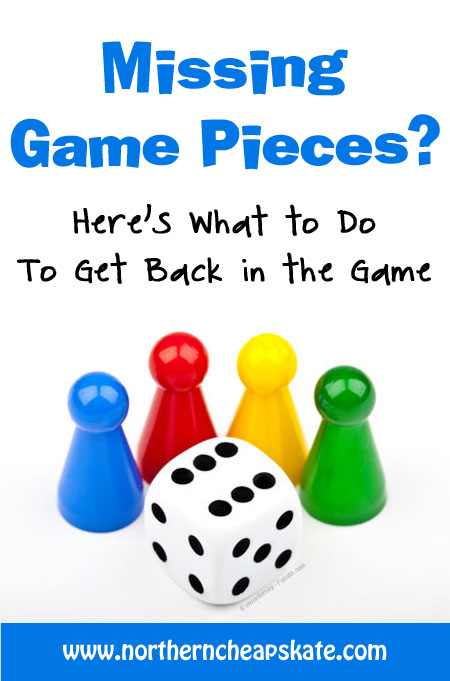 We all like to think we take good care of our stuff… but boxes get spilled, children get involved, and one day we realize we’re missing game pieces to our favorite board games.

Don’t let it ruin your fun!

What to do if you’re missing game pieces

Just because you’re missing a game piece (or two) is no reason to abandon the game. Here are a few possible solutions:

Contact the manufacturer of the game. For example, Hasbro, which owns numerous game companies, including Milton Bradley and Parker Brothers, sells replacement game parts online. For a couple of bucks and shipping, you can be back in the game in no time. The Hasbro website also has free downloadable instructions for thousands of games.

The same holds true for companies like Mattel and Fisher-Price have similar programs and between the three game companies mentioned above, that should just about cover all of your needs!

Ask on Freecycle. Someone somewhere may just have that same game and not want it anymore. You may be able to replace not just your missing game pieces, but the entire game for free. You could check on Craigslist, too.

Scope out garage sales and thrift shops. Obviously this will take some time, but if you’re the type of frugal person who likes to go to these places already, then just add the game with the missing game pieces to your shopping list.

Borrow game pieces from another game. When I was a kid I played my mom’s Monopoly Game from when she was a kid. Since she had three siblings and lots of friends and cousins who played the game with them, they used pieces from the game Clue to serve as tokens in Monopoly. I was a teenager before I realized that you can’t be the knife, the rope or the lead pipe in Monopoly!  Borrowing game pieces from another game is a great way to make an old game playable again without any cost or hassle.  Just remember to put the pieces back when you’re done.

Make your own pieces. You can use buttons, small toys  or coins as game tokens.  Or you could get creative and sculpt something out of an oven-baked clay or design something on your computer. Look around your local craft shop or hobby store for inexpensive alternatives. Use your imagination.

Just because you’re missing game pieces, doesn’t mean the whole game should be headed for the trash. If you don’t want to take the time to replace the missing pieces, then think of other things you can do with the remaining game pieces and game board.  You could make art for your walls, magnets, jewelry… the possibilities are endless.  Or list the game on Freecycle or even eBay and let someone know what pieces are missing.  Someone may be looking for a great deal on those game board pieces you do have.