You are here: Home / Frugal Living / Up-cycling a Cashmere Sweater into Wrist Warmers 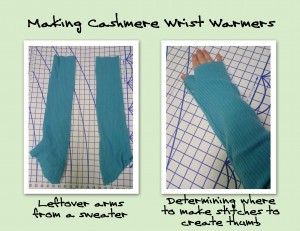 I started by taking the arm pieces of the sweater and marking them with pins where I wanted stitches to be for the thumb and the hem. I only needed to make one hem since I was using the finished edge of the arm as the other end where the fingers and thumb would protrude.

The finished edge of the arm was just a bit wider than I needed it to be, so I needed to sew in the seam by about a half inch, which was great because on one arm I had a stain and small hole right by the seam that would be removed by altering the seam placement. 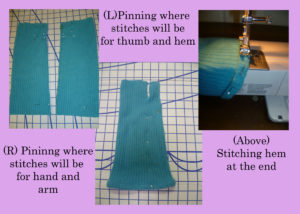 The next step was getting started on machine stitching the new seam part and the thumb. On the first wrist warmer I stitched, I had stitched the hem right away, but after I tried it on I realized that the entire seam needed to be reconstructed to make the width smaller.

So, I was back to pinning to create a new seam.  Once I was done with the first wrist warmer I was able to put the pins in all the correct spots on the second wrist warmer and stitched the hem afterward. Stitching the hem afterward meant I had less stitches to make and had a smaller surface area to pin. Since cashmere doesn’t fold flat when making a hem you have to hold your double fold in place while you try to pin it, which isn’t the easiest thing to do. 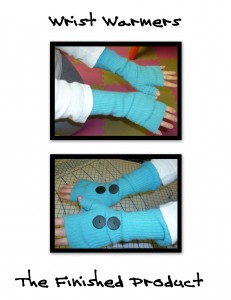 I thought I would give you a couple different options on a finished product. You could leave them plain or choose to embellish them with some buttons or maybe some ribbon.

These instantly warmed my wrists and hands when I would put them on to check my measurements. I kinda wish I already had a pair when I was stitching them since my sewing machine in located in an unfinished area of our basement that doesn’t have heat in it unless I use a space heater.

I bet you are wondering where the rest of the sweater went. The body of the sweater was up-cycled along with a wool sweater into a dress for my daughter. You can check out that dress at Save Green, Being Green. There are still some parts left and I have one more idea of a craft that I can make out of those small parts.