You are here: Home / Frugal Living / Why I Stopped Making New Year’s Resolutions 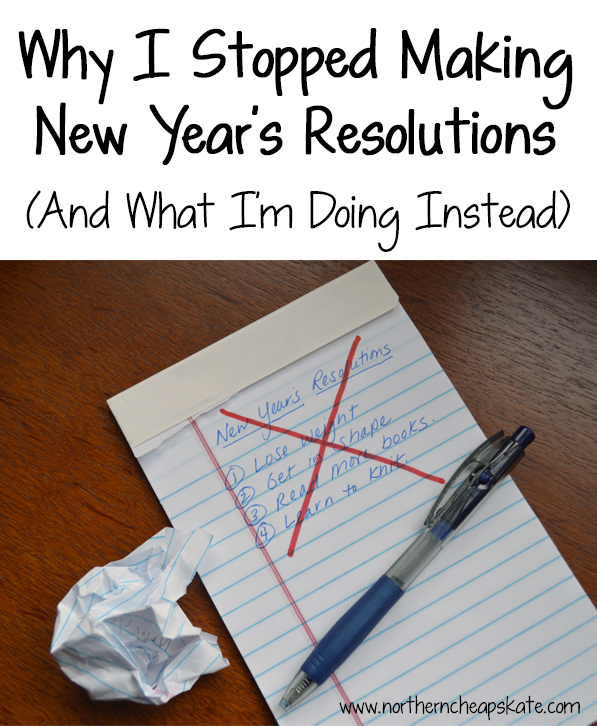 I used to make New Year’s Resolutions.  Every year around New Year’s Eve, I’d sit down and think about what I wanted to accomplish in the next year.

Sometimes I would write down my resolutions.  Other times, I would not.  Sometimes I blogged about them.  And then I stopped making them.

Part of the reason we fail at New Year’s resolutions is that we make them for others.  We come up with them at holiday parties or around the table with loved ones and we feel we have an image to maintain.   We know all the things we “should” do, like getting in shape or giving up soda, but they’re not necessarily the things we want to do.

It is really hard to stick to New Year’s resolutions.  It’s especially hard if you’re kind of vague in making them and don’t write them down.  Once we’re headed into spring, most people have already abandoned their resolutions.  And by the time we get to October, they’ve been completely forgotten.

Failing to stick to my New Year’s resolutions made me feel like a total failure.   The whole point of setting New Year’s Resolutions is to try to improve on your life… but when you don’t make those changes, you end the year feeling like a failure.  I stopped focusing on all the good I had done throughout the year and instead only focused on the negative.  I only saw all the things I didn’t do that I said I would.  It just doesn’t feel good to start a new year feeling lousy about the previous one.

What I’m doing instead

The first year, I did this, I chose a “less is more” theme.  This theme helped me to declutter, resist buying things I didn’t need, and simplify our lives.  Last year, my theme was to “Live greener.”  While, I’m far from what most would think of us “green” or “crunchy,” I did make positive strides on this theme from remembering to bring my reusable bags when shopping to using fewer paper towels.

Setting a theme has worked so much better for me.  Why?  Because it allowed me to consider my actions each and every day and how they fit with my theme.   Unlike New Year’s Resolutions, which are mostly set and forget, a theme allowed me to focus on my goals throughout the year.

I didn’t reach December and think, “Oh, man, I didn’t do those 10 things I said I would do.”  Instead, I was able to look back and see evidence of small things I had done throughout the year that had helped me live my theme.

It’s also far easier to carry the themes into the next year.  I didn’t stop thinking about my consumerism and clutter when I started to work on living a greener life.  Instead, I was able to incorporate many of the habits I’d developed with that first theme into the next year.   Having a theme has allowed me to grow in ways I had never been able to when I just made traditional New Year’s resolutions.

A new year, a new theme

My theme for this year: Health.  I’m going to be honest with you.  This wasn’t my first choice for my 2016 theme, but sometimes life intervenes.   I’ve been having issues with tendinitis that have made working on the computer a challenge.  I’ve put on some extra pounds I’d like to lose for good.  My savings account is looking a little sad.  I’ve been neglecting some relationships in my life.  So when I say that I plan to focus on health, I’m not talking about becoming some kind of nutrition and exercise freak.  Instead, I mean that I will continue to take small steps throughout the year to improve all aspects of my health – physical, emotional, mental, and financial. I’ll be sure to share my progress throughout the year, and hope you’ll join me in making the new year a healthier one.

Now it’s your turn:  Do you make New Year’s Resolutions?  Or do you prefer to stick to a theme?  What’s your plan for the new year?